A fascinating insight into the artist David Hockney’s chart over at Learning Curve on the Ecliptic:

I’m not sure how I’ve managed to avoid David Hockney in the Arty-Farty series ’til now – a “Yorkie”, like

me. He was born in Bradford, Yorkshire, UK on 9 July 1937. Cancerian influence is prominent in his chart, Sun and Mercury conjoined are in Cancer along with Pluto. If he was born before 6am then Moon also would have been in Cancer.

It’s interesting that so many of his paintings feature water – Cancer being the Cardinal Water sign of the zodiac.

Without a time of birth for Hockney we can’t know his ascendant. He’s described as “gregarious” and an “ebullient” personality, which brings to mind Sagittarius or Leo rising – but that’s a wild guess.

I didn’t know much about David Hockney, but I am now interested in him. Like I said, great article, you should definitely read it! 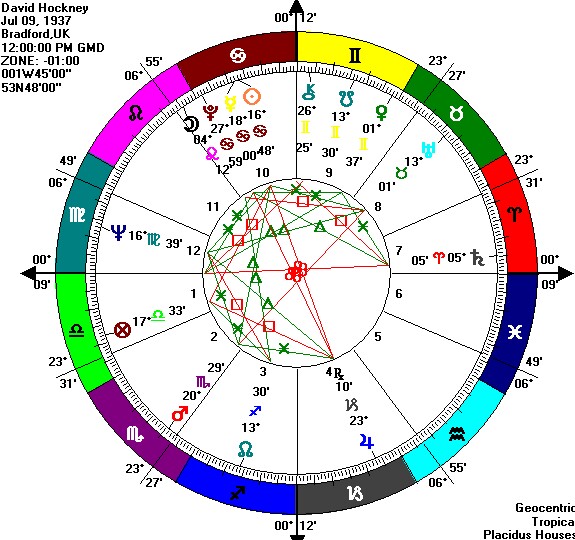